Posted on November 9, 2019 by lorisherritt

From a blank page to a winning essay…Aaron Lu is an outstanding young writer, whose essay, Heart, came first locally, regionally and then third out of thousands of entries provincially for BC and the Yukon in last year’s Royal Canadian Legion Essay Contest in the Intermediate level.

His process began with storytelling. I shared some of my stories of having been at Vimy and showed him pictures of the monument, of the trenches, the landscape and of the carvings that soldiers left behind in the tunnels. This inspired him to do his own research and write a story that was definitely full of heart. Lest we forget… 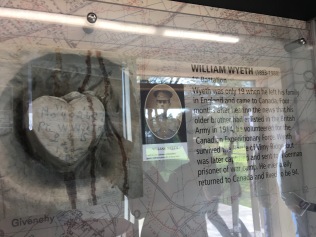 History was not that interesting to me until I read about some of the things Canadian war heroes had left behind. A story that stuck out to me lies underground at Vimy Ridge. Soldiers waiting there carved images on the walls. The men may not have survived but their feelings and emotions are preserved in their artwork. The carvings helped me to relate to what they were experiencing in the days leading up to the moment they went “over the top” and to understand what they might have been feeling. I imagined what it would have been like to be one of them and suddenly, history was not something of the past, but something that lived on.

The souterrain felt claustrophobic. It was damp, dark, stinky and muddy. Rats ran everywhere, jumping over our bodies. I hadn’t seen sunlight for a whole week, and I really missed the outside world. Because of my skill in the mines back home, I was assigned to dig under the German trenches, and place explosives there so we could blow their trenches up from underneath. It wasn’t nearly as easy as it sounded. I had been told that there were German soldiers quietly listening for us, and any noise that we made would expose our location. We also had to be fast, because we knew the Germans were trying to do the same. It was gruesome,monotonous work. I toiled in near silence, and every moment, I was scared that I was going to be blown up by a German mine. Sometimes, I felt like running home, away from the war, but I knew it was my duty to be here for the benefit of our nation. This morning, German soldier movement was detected and I was ordered to stop digging immediately.

Now, I was sitting in the tunnel, and I felt a familiar longing for home. Even though the past few days had been frustrating, frightening and cold, there was one moment that lit up my whole body. It happened two days ago, when I received a package from my family. It was the first time in weeksthat I’d felt happiness and excitement. Inside the package was a red heart, carefully knit by my younger sister. I kissed it. I missed my family so much and I really wanted to get back home and reunite with them. The other soldiers were either sleeping, or carving on the chalk walls. Some drew maple leafs the new symbol of Canada as a nation. Some wrote words, and some drew pictures. I took out my knife, and started carving my own image. I might not survive this war, but my inner feelings would. I drew a heart, representing my love for my family. I was about to draw a family picture, but just as I started, I heard an order from the commander. It was time to go over the top.