Posted on September 15, 2017 by lorisherritt

Art is all around us. On a recent trip to the Canadian National Exhibition (the CNE) in Toronto, I came into contact with the Unity Pole, a magnificent piece of artwork created by Ojibway artist Kris Nahrgang. I was immediately inspired and energized. 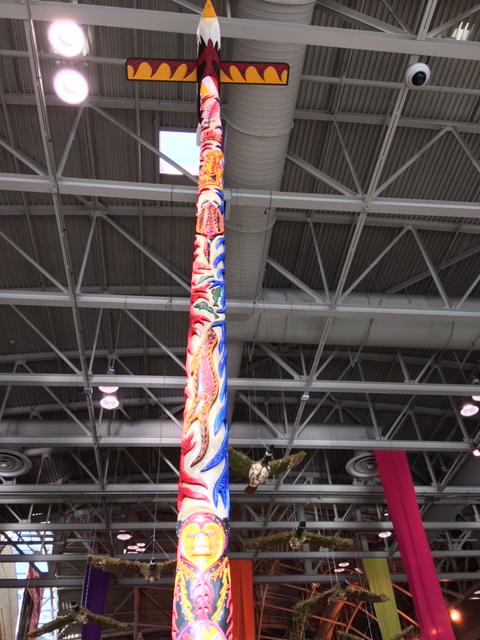 As I was soon to be presenting to teacher candidates at Brock University at the Arts Matter Conference, a unit on using drama across curriculum with a focus on also incorporating Indigenous culture, I saw this as a wonderful teaching tool!

Below is the information and inspiration behind the symbolism that was selected and highlighted by Kris in carving the Unity Pole as well as how it was turned into a lesson that can highlight diversity, acceptance, empathy and understanding in any classroom.

Symbols: Turtle: refers to Indigenous creation stories. It is rooted at the bottom of the pole and is the foundation of the other stories, holding the weight of the other images and allowing the story to build.

Bear: The Canadian Black Bear represents family and on a larger scale, Canada’s culture. He is beating a drum with feathers attached. The drum celebrates the heartbeat of our community and our connection of family and Mother Earth. The feathers represent healing, the various cultures in our communities and the need for healing in our beating hearts.

Otter Loon and Fish: Otter and Loon are depicted above scattering fish, their source of nourishment. Fish are a staple in many Indigenous people’s diets as well as in the diets of many other cultures. The feed us, nourish us and look after us. This shows the importance of working in harmony and as a group as well as the beautiful resources we have in Canada. The movement of these creatures emphasizes the need for groups to work together to survive in today’s trying times.

Wolf: The wolf is howling a prayer of hope. He sits atop the conflict of the story.

Beaver and Maple Leaf: The beaver represents everything the fur trade brought to Canada including the very beginnings of “good and bad” for Indigenous peoples. The maple leaf is the national leaf of Canada. The combination of these images pays tribute to the CNE’s vintage emblem which originated in the 1920’s and underscores the relationship of the fair with Canada and its community.

Eagle Feather: In Indigenous culture to receive an eagle’s feather is the highest honour you can receive as a person. , it’s given only when you do great things or when you’ve done something for your people. It is painted white to represent healing. It symbolizes healing trickling down the pole and bringing with it reflection and balance.

Spiral: the spiral is painted the 4 colours of the community: red, white black and yellow reinforcing the story line of the pole, calling to action a need to come together.

Eagle: The eagle symbolizes a messenger that can fly between the spiritual and mutable worlds. The eagle here is shown passing along the messages of the Creator by absorbing the red power lines through the spiral. The eagle is also shown sending blue power lines back through he side of the pole.

Red and Blue Painted Power Lines: Power lines run along side of the pole. The red power line symbolizes hostile energy and flows through the story of the pole before traveling up through the eagle. While the blue painted power line, representing balance and calm flows down through the eagle in the hopes that coolar heads will prevail in times of conflict to help usher in an era of harmony throughout Canada and its peoples. 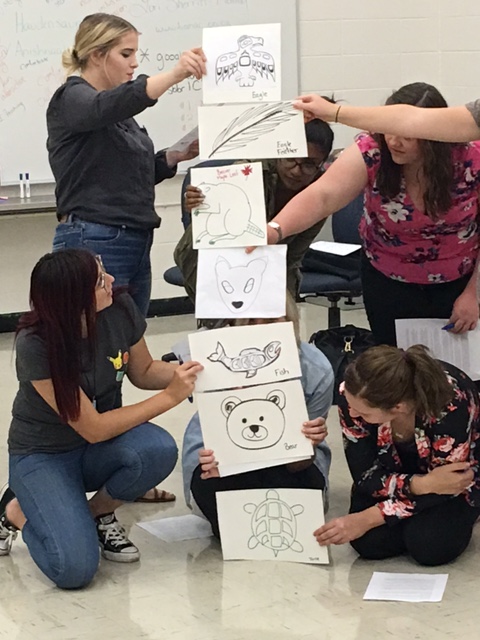 Lesson: Review videos and stories about the artist and the Unity Pole. Print out the meaning of the selected symbols. Frame the lesson with information on the cultural significance of totem poles using historical images to support.

-Collectively review how to write an I Am poem and write the first part collectively.

I am the totem pole,

I wonder if people understand my symbols.

I hear the drums, the heartbeat of my people.

I am the totem pole.

Students then fill in the following based on the information Kris used above in his Unity Pole.

-Once students have written their section, they practice choral speaking with the collective piece, then, move in, reciting their segment to create a dramatic poem. Singing, chanting and drumming can be used as intervals.

This format can also be used to create a class totem based on the many cultures that make up a classroom, or a school totem with each division or group of students creating a symbol to represent them, their culture and what they bring to a united, unified Canada. 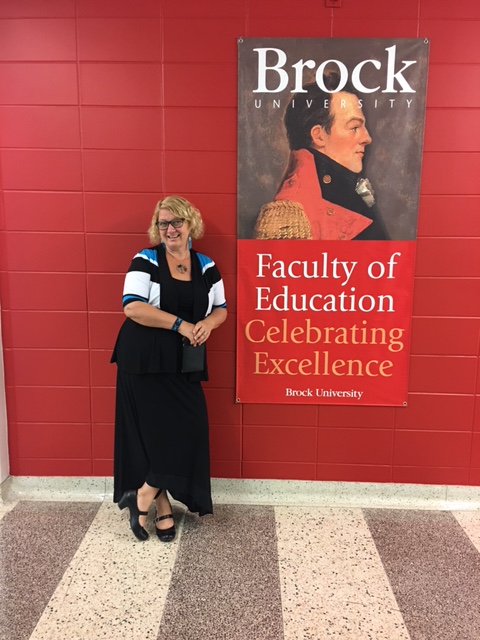